Luka Nestorovic with his school team after winning the championship of England Foto: www.oxfordmail.co.uk

Luka Nestorović is a 14-year-old goalkeeper at Oxford United Academy who recently joined the Sportifico community. 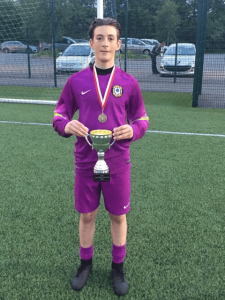 Luka Nestorovic with the trophie and medal Foto: Private archive

Luka took his first steps in football six years ago, at Reading FC, a club which has a senior team competing in the English Championship. He spent four seasons there, then joined the team that he plays for today.

He travels from London to Oxford five times a week – he trains four times and plays one game per week. Although he takes football seriously, this young goalkeeper hasn’t neglected his education and is also very successful in school.

Apart from playing for his club, Luka also plays for his school team, with which he twice won the championship of England, in which all schools participate. His collection also includes two County Cup trophies, the tournament of the county of Oxfordshire.

Luka was born in Oxford and lives with his family in London. His family roots are from Radalj, near Mali Zvornik, and although he was born in England, he has a great desire to play for Serbia’s national team.

Some of his peers and teammates are already in the England youth team, while Luka is patiently awaiting his call to don the shirt with the Serbian coat of arms.