He began playing football at 7, and at 22 years of age he was already involved in coaching. His dreams came true when he took over U21s of FK Smederevo (formerly known as Sartid) – the club where he was brought up as a footballer. Self improvement, education and willingness to succeed took him to China, a country where football is in expansion. He joined the Sportifico network in February last year, and these days he’s been beefing up his CV with results from his Elite Minhang Team. He is 29 years old, he owns a UEFA A licence and his name is Dušan Rašović.

He developed affection for the beautiful game in his neighborhood. He would chase the ball with his friends from morning until dark. It was only logical to join a team, and FK Sartid was his choice. 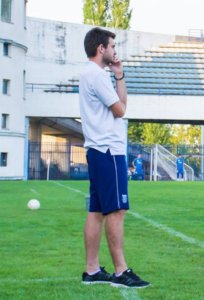 ‘I started playing for Sartid at seven years of age. In this period the club had a large number of kids in their youth setup, overseen by quality coaching staff. I went into senior football early, at 17 years of age. Most of the time I’d play in a zonal marking setup, until an injury put a stop to my career at 22.’

At that point he already knew what he wanted to do following his playing career, and his injury only sped up the process.

‘A job in coaching has always had a certain appeal for me. One year after I got injured I enrolled to get my coaches badge with the Serbian FA and got involved with FK Železničar from Smederevo where I took over their U21s who competed in one of Serbia’s regional leagues.’

In my first season I was adapting to the new position and new responsibilities, but the results were satisfactory.

‘Responsibilities of a coach are very much different from responsibilities of a player. It was necessary to take on training and competitive activities, which require you to take on more responsibility than usual. There was a lot of wandering, mistakes and failures, but solid results and everything I learned throughout the course of that season were the main satisfaction for me inspiring me to move forward.’

His next challenge was working with the senior squad. Responding to the invitation from Dragan Paunović, one of Sartid’s prominent players, he moved to FK Mihajlovac where he worked as an assistant coach.

His experience in being both the head coach and the assistant coach helped him realize how important this relationship is for the team to prosper.

‘I carry opinion that a head coach and his number one need to be compatible, above all. They need to be aware of their good and their not-so-good sides and make their mutual decisions accordingly, in the team’s best interest. The type of cooperation needs to be defined upfront so each segment of coaching gets sufficient attention. In the top clubs, the coaching staff counts over 10 members which means each of them need to be carefully selected because in the end it is the head coach who makes decisions based on opinions and advice of his collaborators.’ 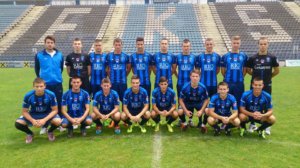 Following his stints with FK Železničar and FK Mihajlovac, Dušan’s wish to return to his club FK Smederevo came true, this time as a coach.

‘Nemanja Vidić once said he’s never dreamed of playing for Manchester United, but that he’s already lived his dreams by playing for Crvena zvezda. Such was my wish to be a part of FK Smederevo. This isn’t just a canned phrase, I was really proud of myself when I signed for my club, but also aware of the responsibility I need to carry while working in this club that won honors such as the national cup and they also participated in the European competitions.’

Working with U17s and U21s, he’s done a great job and prepared many of them for first team action. However, Shanghai sent him the offer he couldn’t refuse.

‘The president of China is a football fan and he invests a lot of his efforts and resources to stimulate development of football. JuJuSports Academy is present in 12 out of 16 districts in Shanghai. Kids from age five to seventeen go through training process and get educated in football theory. Besides that, each district has an “Elite team” for age groups of 9, 11, 13, 15 and 17 competing in Shanghai’s local league.’ 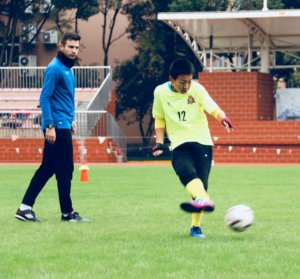 Dušan is a head coach with U15 Elite team of Minhang district that counts over 2 million residents. Despite a huge gap in quality and understanding of football, he adapted quickly.

‘My colleagues who were here before I arrived helped me adapt. Relatively quickly I adjusted to the Chinese culture and this way I was able to dedicate myself to working at the academy. School is the #1 priority in China as they’re trying to establish a system mirroring the United States. Their goal is to provide kids with the opportunity to engage in sports while educating, but until recently they haven’t been dedicating much attention to football. This is now changing, and there’s no doubt Chinese players and clubs will keep getting better and better.’

Just like China, Dušan dedicates his attention to education as well as he owns a UEFA A licence.

‘If you want to be successful in this job, it is necessary to constantly educate yourself and follow changes in contemporary trends of the game. Ever since I got into coaching, I’ve been enrolled in the Center for education of football coaches in Serbia, besides that I try to participate in seminars. I also try to add to my football knowledge by consulting with coaches of all levels, reading relevant publications and by following online portals dedicated to football.’

As both a player and a coach, he is aware of how important it is to improve on a daily basis.

‘A player who is conscious of both his good and bad sides will improve himself and raise his game to a higher level with ease. Also, coaches who do stats analysis with care could point out player’s shortcomings and give solid advice on how to fix them in training.’

Dušan has a message for all of his current and future colleagues who get into coaching early.

‘The most important thing is to have support of your closest friends and family like I did. When you’re in a positive environment, it is easier to overcome problems, hardships and obstacles waiting on every coach at the beginning of a coaching career.’