Marko Protić with his generation of 2003. on Football Association of Serbia Summer Camp Foto: Private archive

Marko Protić is a 14-year-old who plays left-back for Leyton Orient FC Academy, but also covers the positions of central defender and defensive midfielder. He recently joined the Sportifico community and shared his first status on the network. 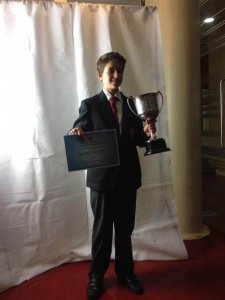 Marko Protić with the trophy for the best athlete of Chinford Foundation School in 2015. Foto: Private archive

Marko started training football at the age of six – he spent two years at Arsenal‘s academy, before transferring to Leyton Orient Academy, where he plays today. He is the only player of his generation who is still at the club, which is why he enjoys the great trust of coaches and club bosses, who have already offered him a contract extension. He is the coach’s first choice to take penalties and free kicks.

Apart from performing for his club, for the last three years Marko has also played for the Waltham Forest representative team, which competes against other districts in London. This fourteen-year-old footballer wears the captain’s armband for this tea, and in 2015 he led them to second place in the Cup of London, while last year they finished second in the League and took the Cup of London.

His talent, dedication and good performances proved to be good recommendations, and in November last year he became part of the Essex County U14 squad. 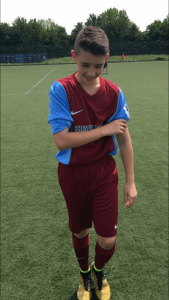 For Marko, education is just as important as football. He attends the Chinford Foundation School, which pays great attention to athletes and which was attended, among others, by the legendary David Beckham and Tottenham striker Harry Kane. With his school team he has so far won the Waltham Forest School Cup and the Essex School FA Futsal Tournament, as well as finishing runner’s up in the London School Cup.

The school awards an annual trophy for the best athlete, which Marco won in 2015. Ten years earlier, that same trophy belonged to Kane.

This young footballer also has a great desire to one day wear Serbia’s national team shirt. To date he has participated in the Europa camp Mini-maxi League, as well as being part of the squad of those born in 2003 at the Summer camp organized by the Football Association of Serbia.