In the period from March 28th to April 4th, the Sportifico team will stay in London and form part of the Saša Ćurčić Football Academy – where it will support a large number of the talented youngsters from the U.S. and Europe who will participate in this developmental event. 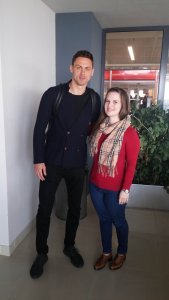 During its stay in the English capital, the Sportifico team will attend numerous sporting events and have the opportunity to present the successes of the promising athletes and coaches that form part of the Sportifico community, the international sporting public and major names in sport.

Immediately prior to the departure of our flight to London, we had the honor of meeting Nemanja Matić, captain of Serbia’s national football and member of London club Chelsea’s first-team squad. Following his international duties, he and his family were returning to England, where he is already on Saturday awaited by the continuation of the Premier League, with a match against Crystal Palace.

In accordance with the reputation he has earned, Nemanja was very friendly and open. During the boarding of the aircraft, he went out of his way to greet all the passengers who wanted to shake his hand, and from our conversation we were able to confirm for ourselves that he is accessible and open for cooperation.