The Super Cup match between Real Madrid and Manchester United will be played at 20:45 at Philip II Stadium. Both teams held open practices yesterday for the media, at which the Sportifico team was present, which gave us an opportunity to see both squads practice and talk to some of the players and managers. 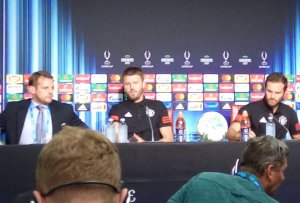 Manager of the Red Devils, Jose Mourinho, was the first to talk to the press, after which Juan Mata and Michael Carrick took the podium.

Juan Mata, who also serves as an ambassador for the Laureus Foundation, used this opportunity to talk about the power of football in giving young people all across the globe a chance to learn and grow.

The main question for 36-year old Carrick was how he is able to continue to play at such a high level despite his age.

“The opportunity to play for so long for a team such as Manchester United is motivation enough to always do my absolute best. What I most appreciate is the opportunity given to me to grow, as a football player, alongside some of the best players and Alex Ferguson. Young players should use the experiences of their older teammates’ in their own personal growth”, Carrick said. 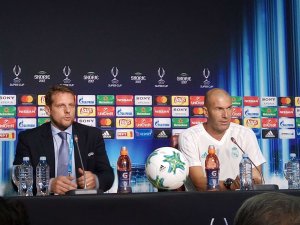 Sportifico used this opportunity to ask the Los Blancos manager whether the fact he had a successful career as a football player makes him understand players‘ needs better and whether it’s because of this that he is able to help his players deal with the pressure of playing as the favorites.

The legendary French player and already successful football manager answered with a smile: “Back when I played football, the strongest motivation and will to win came when we played against Real Madrid. I’m trying to make the best possible use of my experience as a player since I am only just getting started as a manager”, said Zidane.

The captain of the La Liga champions, Sergio Ramos, has experience playing under Mourinho in Real and many believe that Mourinho provided a huge boost to his career when he moved him from full back to center back.

However, the Spaniard said that it’s important for players to take advantage of the experiences they garner with every manager they get a chance to play under.

“Every manager had a big influence on my growth as a player, and Mourinho is certainly one of them. I have enjoyed working with him, as well as with other experts who I had the opportunity to work with, and I wouldn’t want to single anyone out”, Ramos said.