The inspiring story of how Vladimir Petković and Ljubomir Radanović built up a respectable school of football from a patch of grass in a park.

Two former footballers were led by life down various routes, some accessible and some less so, but they both succeeded in going full circle and returning to their first love – football. And could there be a more appropriate place for something like that than London, the capital of the country that is the cradle of football and a place where green rectangles are considered sacred?

When they find themselves abroad, people from this area stick together, and sport has perhaps always been the best way to mutually connect and socialize. It was just such a form of socializing that led to the birth of an idea that is slowly but surely growing into something serious: a respectable school of football.

“We started working eight years ago, and the idea arose spontaneously during a football session that I play with friends. My colleague Ljubomir Radanović, who has been with me from the start, and my teammates from the team I play with recreational every week, often asked me, “Why don’t you start training our children, for a start?” So, Buba – as Ljubomir is popularly known – and I started with two children, from a nearby park in London.”

It took off very quickly – today in the ideal conditions of the “Goals Soccer” center in Ealing (a London suburb), the Gunnersbury Eagles FC school of football has more than 50 members, mostly children originating from the territory of the former Yugoslavia.

More good news is the fact that they have been joined over time by children whose parents settled in London from Greece, as well as talented footballers originating from England. 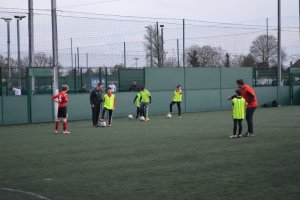 “Children come to our training on the basis of recommendations, and in all three competitive squads (U8, U10, U12) we have players of all levels – some are there to compete, while some come to socialize and avoid spending time in front of a computer. We are volunteers, with money from membership fees being spent exclusively to cover the needs of the club.”

When we established the club, which works with kids aged up to 13 and is categorized under the auspices of the EUFA system as a bac football program (UEFA Grassroots), we received 3,000GBP from the Football Association of England. Coaches have the opportunity to study to acquire licenses to work with children, while all three competitive squads have the opportunity to compete in the regional leagues for their age groups.

“I don’t feel the need to work with the older squads or to lead some senior team. I am fulfilled by working with children, because at that age progress is most noticeable. I feel the greatest sense of satisfaction in my work when I see a child who came without any knowledge of football begin, after a while, to understand situations and moments in the game,” explains Vladimir.

“One of the youngest members of the school if five-year-old Filip, the son of Nemanja Matić. He dreams of being like his father, and Nemanja supports him on that road, but with one obligation – school is the priority and he must have excellent grades. If they fall, Nemanja says “no football” until the situation improves.”

Vlada, Filip’s coach, played during his time at Kolubara from Lazarevac with his grandfather, Nemanja Matić’s father, when the latter was at the end of his career, and now in London he again has the opportunity to be part of the career of a member of the Matić family.

From Obrenovac to London

“As a kid I started to train in my hometown of Obrenovac, at the Radnički football club. After just a year and a half, the late Gojko Zec included me in the first team, for which I had to have a special medical check-up so I could play. After that I transferred to Red Star, where I spent the next four years.”

Next came toughening up at Kolubara from Lazarevac, after which he went to play for Radnički FC from Pirot.

“Then we were promoted from the third division to the second. We were close to entering the first division, but we finished in second place behind Pristina and didn’t get promoted that year. This was a team that had players like Kežman, Gvozdenović, Drobnjak, Sale Gruber etc.”

After Pirot, he received a call from OFK Belgrade, where he spent the next three years, before going to Brazil in 2001.

“After Brazil I came back and went to Rad FC, only to again play a season for my hometown club, Radnički from Obrenovac. Next came a move to Cyprus, where I met my current wife.”

Vlada, who spent his career as a defensive midfielder and was considered a rough player with sharp tackles, is now a dedicated coach and father of three.

Buba – against Partizan even injured

“I started my career in my hometown of Osijek, but because of the war I moved with my family to Apatin, where I played for Mladost – just like Vlada, I was very young when I debuted for the first team. Serious injury prevented my further progress, but I still found the strength to play a friendly match in 1993 against Partizan, my favorite club,” says Ljubomir, recalling his career.

Two years later, his Higher Business School studies took him to Novi Sad, where he continued to play football, then in 1999 he decided to move to England, when he married and his son Stefan was born.

“Here life took another direction, with various jobs and the adjustment period, until Vlada and I opened the school and returned to football, which we can’t live without.”

Great support from Bane and Nemanja

“Towards the end of the second year of work with the school of football, we came up with the idea of organizing an exhibition match for players and parents. Then we were still in the park, but Bane and Nemanja both joined in, playing in jeans together with the parents, and so we arranged a nice gathering for our members,” explains Buba.

And Stefan, the son of Branislav Ivanović, took his first steps in football at the school of football that’s run by Ljubomir and Vlada.

Numerous coaches in England who work with younger categories have great support from parents, who serve as volunteers and help out at the club.

“My coaching career started in such a way that I helped the coach of the club where my son Stefan started, and over time I gained more confidence from the parents of these players than the actual coach. That led me to start thinking in this direction.”

Unlike Vladimir, Ljubomir might engage in the adventure of working with older squads, but his commitments to the job he does privately means that for now he is focused on the school of football.

“People aren’t aware how high quality our coaches are! If Serbia had the conditions that coaches in England have, with their knowledge and Balkan temperament, they would achieve extraordinary results,” notes Buba.

Ljubomir and his colleague have achieved their greatest result simply in the fact they have managed to bring together in one place children originating from the area of the former Yugoslavia. 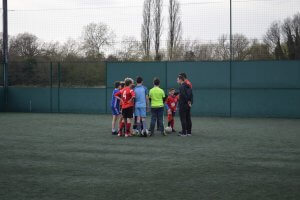 It is an exceptionally nice feeling when – in the framework of a sports center that has more than ten fields – you hear coaches leading practice sessions in our language.

This trainer tandem took thirty children to the World Cup qualification match that Serbia played against Wales in Cardiff. That was a special event for children who dream of one day playing for the Serbia national team, even though they were born and raised on English soil.

At a time when football schools are organized across Europe for profit, this sporting story from London is a genuine example of how the combined efforts of coaches, players and parents can build a healthy environment conducive to the development of young athletes, but also young individuals.

For Ljubomir and Vlada it is important that the children enjoy playing and learn the basics of football, but above all that they become and remain good, well-mannered people if they do realize their football dreams.