During a FIFA seminar held at the Football Association of Serbia’s Sports Centre in Stara Pazova, Belgian lady Anna Noé spoke about the key differences between women’s and men’s football.

Apart from that, we also discussed the problems and prejudices faced by women players during their careers.

During her five-day stay in Serbia, during which she passed on her vast experience to young coaches of the Football Association of Serbia’s development league for girls, Anna demonstrated all the essential footballing skills that a coach must possess and also pointed out that attention must be paid to when developing players.

In collaboration with Hope Powell, an Englishwoman and the first female to possess the PRO license for coaches, Anna is currently working on educational material that will represent required reading in FIFA’s programme for the development of women’s football when it comes to coaches.

“What coaches working with age categories that are in development should always consider is the difference in players’ individual abilities. Today it is often the case that coaches find plans for their training sessions and exercises on the internet, thereby neglecting the qualities of the players they are developing,” notes Ana at the beginning, before going on to explain the specificities of working with girls and boys:

“The main difference between girls and boys is noticeable at the psychological level. If we start with their motives for taking up football, girls want to enjoy the game and to socialise, while with boys there is a pronounced spirit of competition and need to reach the highest level, to one day be like Messi. That’s why coaches must have a different approach. The relation towards players at the senior level can be best expressed by quoting legendary American footballer Mia Hamm, who said “Treat me like a woman, coach me like a man”.”

How much does your experience in the role of a coach help you in your work with students? 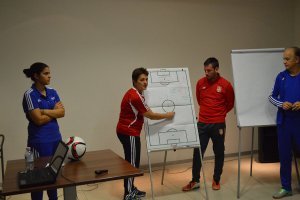 Anna Noé with the coaches of the Football Association of Serbia’s development league for girls | Photo: Ruža Ilić/Sportifico

“There are great similarities in this work, because as a professor at the Catholic University of Leuven, where I teach the practical part, my job is to teach them how to play football. Although I work with adult students, when it comes to girls, you have to approach them on the football level as though they are little girls.

“It’s extremely difficult for me, after completing a three-hour working session at the ‘Elite Youth School’, a training camp for the best young players of the FA of Belgium, to go to the university and teach a class for 18-year-old girls who’ve never played football.”

Having been a goalkeeper, then a coach and now a professor of football, how have you overcome all the prejudices in Belgium?

“At the start, the men on the team won’t accept you, for them you are a woman who doesn’t know anything about football. I told myself that if I wanted to earn their respect I had to prove that I’m good enough and that I know my job. I have never been, and will never be, able to deal with the fact that I am a woman.

“To be clear, I’m not a Belgian beauty, I’m not blonde, I don’t have beautiful eyes, at the moment I am full of wrinkles, but what I am, and what I can make sure everyone knows, is someone who knows everything about football. Finally, provided they realise that you know the game, they will accept you and won’t take any notice of whether you are female or male.”

In the first year, on the coaching license course where I was the only female, the lecturers – at the insistence of their colleagues – requested that I demonstrate chest control of a ball in the exam. That request was followed by laughter and few of them believed that I would and could do that. For me that was a challenge I responded to successfully. It hit me hard emotionally, but I was too proud to show that. On the contrary, it gave me more strength and motivation to show: “Hey you, what you’re asking of me, yes, I’ll do it and, yes, I can do it.”

What is your opinion on the Serbian national team and what does the Football Association of Serbia need to do in order for our women’s national team to be more competitive in the future?

“I think the Serbian national team is already very competitive! Recently the teams of Belgium and Serbia, Under-17 squads, met in qualifying for the European Championships and they were completely even. However, what both Serbia and Belgium need to do is create a larger player base, in order for selectors to have a greater choice for the national team. The aim is for girls to have strong competition. If that isn’t the case, it can happen that they don’t want to work on themselves, because they know that their place in the national team is guaranteed.”

The national teams that are the most successful in the world today, which also includes Belgium, also previously faced a lack of players and genuine competition for places.

“That’s precisely the problem I had 10-15 years ago when I started working as a selector – I wasn’t able to remove from the list five girls who didn’t work on themselves individually, because I only had a total of 20 players from which I was able to put together a team.”

In order for coaches to make girls in the development stage into top players it is necessary to focus on the little things that will build up their footballing technique.

“What I noticed in the week I spent at the FIFA seminar in Stara Pazova with young coaches from Serbia is their enthusiasm and energy. Our duty, or rather yours, is to be devoted maximally to those coaches in order for them to retain the energy they now possess and to begin paying attention to the details. For example, passing and receiving is easy to do, anyone can do it, but the point is that instead of 2 to 3 touches, it can be passed with just one touch. The only thing is that to make that happen one must use the correct leg in any given situation.”

The game forms the basis of every training session 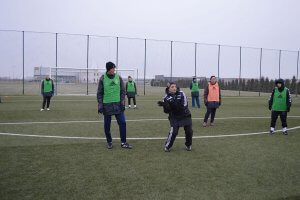 Demonstration of theoretical work on the pitch at the Serbian FA’s Sports Center | Photo: Ruža Ilić/Sportifico

During her lectures, Anna Noé emphasised that every exercise and training session must be correlated with a real game situation.
The placement of exercises on the field must be directed towards game play in order for young players to gain a real sense of space during the period of their development.

Where do you see room for women’s football to improve over the next decade?

“The biggest progress has been made in terms of speed of play, and in that sense we can still progress. When I watch a DVD of the World Cup from 15-16 years ago, the game was pretty, but very slow. The same goes for men’s football.”

Analysis of all FIFA and UEFA championships over the past decade leads to the conclusion that, together with the fitness levels of the players, the game itself is also changing.

“I believe that in women’s football a visible shift will come in terms of the physical dispositions of players. For example, ten years ago you couldn’t see a girl sending a pass 45 to 50 metres, while today every team at the highest level and every player can deliver a cross-field pass. This is not just about power, but rather the type of training, as well as how much time is spent training. When the game speeds up, more fans will also follow women’s football.”

“Initially journalists would often ask me what the difference is between men’s and women’s football, to which I would respond with the question of which men’s squad we are comparing with the women’s national team?

Is this a team that plays fourth division or is it the U19 national team? In order to notice the progress of women’s football, you have to stop looking at it from the perspective of men’s sport, because one thing will not change – the body of a woman will never become the body of a man.”

To conclude, as a legendary goalkeeper of the Belgian national team, do you consider there to be a difference when it comes to coaching male and female goalkeepers? 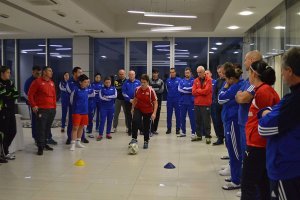 A coach must always be creative and adapt to the conditions | Photo: Ruža Ilić/Sportifico

“No. The elements of training are identical; the only area in which girls differ from boys, and for which extra work is required, is in the positioning of the keeper to defend high balls, because girls are not as tall as guys and so they must adapt when defending in front of the goal.

“At the recent FIFA U17 Women’s World Cup many goals were scored via high shots, or due to goalkeeping errors in defending and positioning in such situations. What makes a girl a top goalkeeper today is neither technique nor physical abilities, rather it is exclusively about reading the game.”