The basic role of a physical therapist is to make sure that the body of an athlete is as ready as possible to take on the exertion that lies ahead and to make sure that there are no weak points in the body. Therefore, it’s important to get an athlete as close to an ideal level of readiness so that he or she is able to focus on nothing but playing during a match.

Mutual understanding is of the utmost important because the athlete trusts their physical therapist, his knowledge and experience in the proper physical preparation. 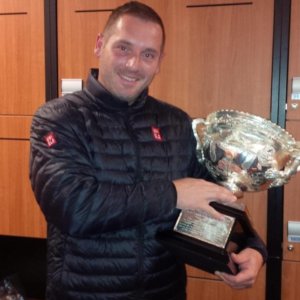 Miljan Amanović is known to the public as Novak Đoković’s physical therapist with whom he worked for an entire decade, from 2007 until May of this year, and the 12-time Grand Slam champion commonly refers to him as one of the key people responsible for all his success. He graduated therapeutic junior college, has worked with the Red Star basketball team and many other successful athletes. He is currently part of tennis star Miloš Raonić’s team. Born in Knin,  Amanović has a wife and two children. His plan and dream is to get together colleagues from all around the world and to present and share knowledge from the worlds of physical therapy and sports medicine with him in Serbia.

Once an athlete determines a warm-up routine that agrees with him or her, the athlete should not alter it. In all sports, your muscles are under extreme exertion carrying the weight of your body, especially when in contact with other bodies, and the job of the muscles is to protect the joints and prevent injuries by doing so.

This is where we come to the importance of stretching – the rule of thumb is that a muscle that is well-stretched has greater resistance towards the possibility of an injury. Every muscle is elastic, which means that it is able to expand and retract, and when you increase your flexibility, you have a greater chance of avoiding injuries. 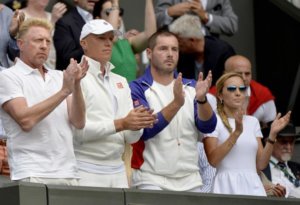 I worked with Novak Đoković, whose flexibility has kept him from injuries for the better part of his career. The shots from “impossible” positions and slides that he performed would have certainly led other athletes to ligament and joint injuries, but his muscles were so elongated that they protected his body.

Active and passive stretching exists. Active stretching is when an athlete independently goes through positions and stretches certain muscle groups, which is usually done during practice as preparation – a player warms up and stretches at the same time. On the other side, in passive stretching, the athlete is in the hands of the physical therapist. In these moments, the athlete must be completely relaxed while the physical therapist takes his muscles to the limits of his stretching positions and increases muscle endurance in that way.

The correct recovery practices after exhausting exercises are another big part of the process of preventing injuries. For starters – a massage. Why? After any physical activity, so-called lactates form in the body and those areas become vulnerable, they become places of lesser resistance and the risk of an injury occurring is greater in those areas. Massages drain the body, the paths of circulation are unblocked and that risk is decreased. 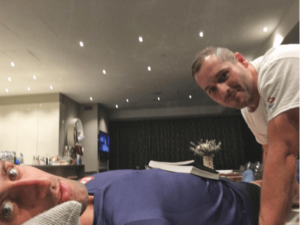 A massage can also be painful if you come across a sensitive area – around the ligaments and the joint capsules where you need to create decompression. That pain is necessary – even though Novak used to joke and tell me I was a sadist, he knew that this pain was “well-intentioned” and that it served a purpose. No pain, no gain, as they say. But usually, a massage ends up being relaxing and has a calming effect.

Other methods of recovery include cryo and hyperbaric chambers.

Cryochambers expose the body to temperatures or -160 to -190 degrees within a short period of time. You enter the chamber, where you will find protection for your hands and feet to avoid frostbite. You also get a mask that protects the lungs, after which you spend three minutes in the chamber – peripheral blood vessels contract, blood is sent to the larger organs, and when you leave the chamber the brain recognizes that the body is cold, which causes stimulation and blood is sent to the periphery. The point of all this is recovery – stimulating the body and speeding up circulation.

An ice bath has the same goal, which is to take the parts of the body that worked the most and dip them in six, eight, 10 or 12-degree water. The effect is similar to that of the cryo-chamber – all of these methods (massages, chambers, ice baths) are good ways of speeding up circulation and at the same time, giving the heart a rest and relaxing the blood vessels. All of this helps athletes to recover more quickly. 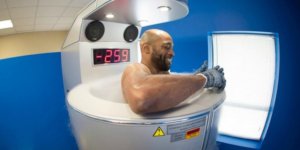 Other solid aids include bandages and kinesio tape. Bandages have a protective and supportive role – to help the muscles and ligaments protect the joints from spraining. On the other side, kinesio tape helps circulation underneath the surface on which the tape is being used and in that way, it stimulates the tissue and takes pressure off the blood vessels – the tape is usually placed on injured parts of the body, but it can also be used to stimulate healthy parts of the body.

Because of the cleats that stabilize the body and the foot to the surface, football players often injure their legs, ankles and knees. Quick bursts, twists and turns…No matter how in shape a footballer is, they can’t guarantee that they are going to remain uninjured when playing if they experience force that is able to tear a ligament or lead to a muscle tear. Also, footballers often have troubles with their lower backs as a result of abrupt contact or changes in direction.

Tennis players use their entire bodies and for them, having a strong core and balance is most important. Also, special attention is given to the elbow, shoulder and neck because of serving and in basketball, ankles, the lower spine and knees get injured the most.

When an injury occurs, the first thing to do is to diagnose it – having the correct diagnosis is 70-80 percent of the therapy process. The diagnosis shows what was injured, how severe the injury was, whether anything is torn or inflamed – it’s much easier to recommend therapy and rehabilitation methods when the problem has been confirmed with great detail.

The time it takes for rehabilitation depends on a few factors – the type of injury, which body part was injured, whether it’s soreness, a bruise, a partial rupture, a contusion…When that is confirmed, an estimate is given for when the athlete will be able to play again, and my advice to athletes is definitively that they should never return to practice before they are ready.

It’s better to miss more time, because that patience will be rewarded – coming back too soon brings with it the risk of new injuries that will set you back for twice as long.

You know what can happen? If a player wants to cut time off of their rehabilitation, then they take actions towards that goal. If a player recovers, he’s tested, he gets the green light to return, but he doesn’t give his all at first because he’s still thinking about the injury. He then forgets about the injury, but then the fatigue that muscles had become accustomed to sets in and in an effort to decrease recovery time they risk the chance of setting themselves up for even more serious injuries. 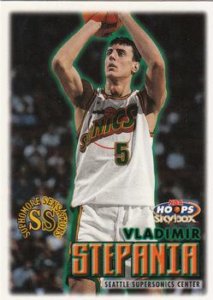 I’ll give you two opposing practical examples. I worked with Vladimir Stepania, who played basketball in the NBA, in 2005 in Seattle.

He had two knee cartilage surgeries, which definitely made the rehabilitation process difficult because he spent a long time on crutches during which he was not allowed to put any weight on either of his knees at all. That’s why we worked actively for at least two hours every day in the weight room – I increased the weight 100 grams at a time in an effort to make sure we strengthened the muscles that protect his knee day in and day out.

My only demand and prerequisite was to have enough time, to not rush anything. Sometimes the muscle will become inflamed or you see some swelling, that means that you need to slow down the process. That’s why it’s best for players to work slowly and not allow that to happen. So I am slowly increase his range of motion and the strength of his muscles. With Stepania, everything was perfect until he decided that he wanted to speed up the process…

Portland was making Stepania play hurt, he sued them and reached a deal that he was not happy with, so he started rushing me. Everything was going well at that point – his right knee was healing remarkably, the left was a little behind because he had surgery on it a little later. We stagnated a bit and he completely lost his patience – he got up using just one crutch and rushed down the stairs of his house, put his leg up on the table and started to press on it and break it. That’s when I saw that the knee started growing and in 15 minutes it looked 15 sizes bigger. Two nights later I was at the emergency room. I could not get over the fact that all that time that was invested went to waste. He never returned and he ended his career at 28.

On the other side, Ratko Varda is a very positive example – he completely trusted me, he was dedicated, he justified my trust and I justified his. He was patient, obliging, he respected every detail and he ended up playing professionally until he was 38.

The conclusion is that you should never rush rehabilitation.

Beverages – What Do Athletes Put in Their Bodies?

The basis of everything is water, because a large percentage of the body is made up of water. Then there are energy drinks that can help compensate for calories that are burned. Classic carbo-drinks are based off fructose, dextrose and maltodextrin.

Drinks need to be combined properly – carbo-drinks and those that have a certain percentage of electrolytes, everything depends on what sport that athlete plays because some lose more electrolytes than others. Many athletes take sweat tests – after a half hour or hour of training, they take a sample of their sweat, it’s taken to the laboratory for testing and then based on the results it’s determined what type of drinks would be best for that athlete based on his need for electrolytes and minerals.

There are many companies on the market that make sports drinks – sometimes it’s hard to choose, but Australia is a country very dedicated to sports and they give a lot of attention to every segment of sports and their companies have started breaking away from the pack in terms of producing quality sports drinks. A recommendation for young footballers is to first do a blood analysis and sweat test and then decide on an energy drink that suits you.

Everything I’ve talked about obviously goes hand in hand with eating healthy and, above all, the desire to persevere on the road towards success.