Although football is magic, football is also tactics, discipline, intelligence, and one crucial, ‘boring’ segment of the beloved game we simply can’t avoid. Her majesty – statistics.

Introduction – from modelling to record-keeping and analysis

In order to get a proper understanding of statistics, namely analysis of statistical data, we need to be mindful of their importance in competition management.

First step is modelling. With regard to demands of the team and its style of play, a model of player in demand is created and it is believed there are player models for specific positions in the team. Say, Dani Alves and Marcelo are among the best fullbacks in the world, prototypes of modern wide defensive players – which characteristics are shared by the two of them and do they represent the ideal player model for a full-back?

Sir Alex Ferguson once said he’s never met a player who loves defending more than Nemanja Vidić – a great example of a mental characteristic modelling the best of center-backs. Furthermore, Arsene Wenger follows players over a course of a season, or two or three seasons, and his observations don’t only come down to tactics, technique and motor skills, but there is also a human and social component to them. 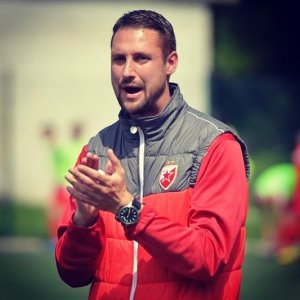 Nemanja Milinčić was born in 1988. and he holds a master’s degree from the Faculty of Sport and Physical Education in Belgrade. As a member of the faculty’s ‘scouting team’ under professor Aleksandar Janković, he collaborated with relevant coaches in the area as well as coaches with international experience. He worked with professor Aleksandar Janković at FK Rad, with Dejan Đurđević at OFK Beograd, and also with Vladimir Petrović Pižon, Miodrag Radanović, Dragoljub Bekvalac, Dragan Radojičić, and also with MIlan Obradović at FK Kopar, in Slovenia. Since October he’s been at Crvena Zvezda and currently works with their U21s.

Next comes selection, decisions are made after all factors have been considered, and after that comes the complicated part – prognosys. Pundits will say someone ‘is the biggest flop in the history of Italian football,’ and then the questions are being raised: ‘Who are the people who selected these players?’ Predicting how a certain player will fit in the given environment is never an easy job.

There are subsequent diagnostics, i.e. identification of perceived problems, as well as planning and programming (creating microcycles, mesocycles and macrocycles) which are followed by their implementation and control in training and matches. At the very end comes the most important part – record-keeping and analysis. 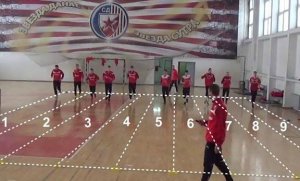 What should be a culmination of the process – record-keeping and analysis – is a cancer to Serbian football. We take up a vocation, but we don’t keep records of what we do and thus have no insight into what we accomplished at the end of a cycle which makes further analysis and learning impossible.

There are even highly-rated coaches that are careless in this respect, they don’t keep records or do analysis on any level – not individual nor group, which means there is no context for the future and no possibility of correction, the final step in competition management.

Nine shapes of the game of football (standard situations)

Scouting and video analysis on one side and analysis of statistical data on the other, are separated in theory, but in practice they are often intertwined. Aforementioned components of competition management represent a gradual path on which every coach walks in his own unique steps.

For example, there is a coach who likes the style of play based on sustained attacks (15 seconds and more), large percentage of possession (65% and more) and he wants to dominate by utilizing a large number of passes. With regards to his style of play, the coach picks standard situations and statistical data found while analysing the opposition (usually their weaknesses) which he can easily exploit.

This coach would say: ‘I want you to tell me what percentage of opposition attacks took place on the wing and what percentage of them was through the middle?’ Alternatively, we can use statistics to find out where opposition defence is most vulnerable, on what parts of the pitch we are most likely to start attacks, can we use short passes or long balls etc. These are individual and there are no universal statistical data equally important to every coach – I worked with 12 of them and each had different demands. 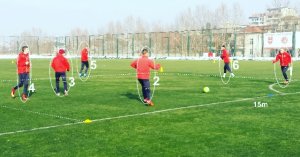 Statistics in football provide for much data (technical, tactical, motor, mental…), but that won’t necessary tell you a lot. A team could have more possession and attempts and still lose, but these are rough, TV statistics. On the other hand, a deeper look into statistics is one of the most important tools if analyzed by experts who know how to get the most useful and most applicable bits from a sea of data. What matters the most in football statistics is success rate, which, in senior football, is the end result – for example, if there were 450/500 successful passes this is presented as 95% success rate.

However, modern football highlights specific situations that repeat themselves in games and we call them standard situations. There are nine of them: attack build-up (1), winning the space in the middle or combination play (2), finishing attacks (3). These are offensive totalities, while defensive are organized pressing (4), organization of defense as a whole, in the final third and in the middle of the pitch (5). Furthermore, we have behavior when changing possession in defense (6) as well as changing possession in attack (7), and finally there are set pieces in defense (8) and set pieces in offense (9).

There are subclassifications of these nine standard situations depending on coach’s demands. For example, when building up play sometimes we are interested what it looks like when the ball is passed from the keeper, or how attack looks when the ball is in play or when center-backs start attacks and so on.

I will give you an example of Sa Pinto when he was managing Red Star. He was extremely dedicated and demanding with respect to the amount of statistical data on opposition weaknesses. He would always watch opposition’s last five matches, put emphasis on opposition build up play and look for ways how to utilise his team’s qualities to exploit his rival’s weaknesses.

Next game preparation plans are conducted by the head coach/manager. First there are correctional training sessions where we work on correcting flaws of our own team shown in the previous match. A complete analysis of opposition (individual, group, team) should be done by then, since this will be generally dealt with second and third day. As the match approaches, more concrete work is done – individual offensive and defensive segments of particular importance to this match.

Each position in the team, but also each individual in the team has his own specific role and not all statistical data is equally important for everyone. Watching a player, many people might say: ‘He played bad,’ not knowing specific demands of the coach for that player. How are we supposed to make such a conclusion if we don’t know what he should have been doing?

I would be the happiest person in the world if every coach were able to follow his players and their development based on data only. However, this is not such a common occurrence but player resume is definitely relevant and it can be of great assistance when recommending players to other coaches. Simple as it is, without record-keeping there is no analysis. Without analysis, there are no corrections, and statistics are the only way to keep record of what has been done, both on youth and senior level. Player resume starts looking better with higher success rates relevant for his position in the team, highlighting individual qualities. It is up to experts to precisely determine data relevant for each player

I am going to show you a simple example so you could understand me better – Leo Messi. During a match, he runs 4000-6000 meters, which is below running average in Europe, and based on that someone might say he’s had a bad game. However, demands put on him are different – he has been given a free role so his other qualities would show.

Furthermore, Chelsea has N’Golo Kante and Nemanja Matić (now at Manchester United) – the two of them play in the same position, but their roles in the team are quite different, therefore interpretation of statistical data relevant for evaluation of their efforts also differs. They complement each other to create perfect balance.

Going elsewhere, we can compare Italian and Spanish school of football – historically, they have taken different courses, they give importance to different things and look at different statistical parameters, but both courses can lead to success. A certain element might be crucial for Conte, but irrelevant for Guardiola.

Based on everything that has been said, it is clear that statistics are an irreplaceable tool in modern football and without it the game would improve at slower pace because we wouldn’t be able to handle corrections in training process and make important conclusions based on comparative analysis of relevant data.