Talented 16-year-old footballer Luka Nedić came to Serbia this summer all the way from Lincoln, Nebraska, with a desire to learn and develop his career. He visited us recently, created a profile on the Sportifico social network and shared his football story with us. 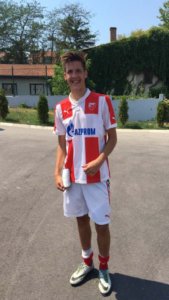 Talented footballers from all around the world arrive to the Red Star camp in Zlatibor. This young man has roots in Bosnia-Herzegovina and stood out in the camp enough to receive an invitation to join the youth squad. His ability and feel for the ball attracted the attention of many other European clubs, but it was fairly easy for him to choose to join his favorite – Red Star.

Nedić has been playing football since he was five but didn’t play his first match until the age of 10, suiting up for his hometown Gretna Soccer Club. The next step was moving onto a bigger club, the Nebraska Futbol Club, after which he arrived to Red Star’s camp.

Last season, Nedić broke the record for assists in the Nebraska Regional League and won two championships. On the regional level, the squad has very strong opponents in Chicago, who have stopped them from qualifying for the National Championship thus far.

It’s common knowledge that European football is not one of the most popular sports in America, which made it easy for Nedić to notice several important differences while spending his time with Red Star.

He was most happy about the way his teammates in Red Star approach the game. For them, football isn’t just a game and they take every practice very seriously, which is something he was really happy to see. That competitive spirit has a positive effect on him. He has to battle for his spot on the team every day, which was not the case in America – and this gives him a greater sense of motivation.

Nedić said that before arriving to Serbia, he enjoy playing football with his father and his friends the most, who were all former footballers. This meant a lot more to him and enabled him to develop his technique a lot more than he was able to do when playing against his peers. 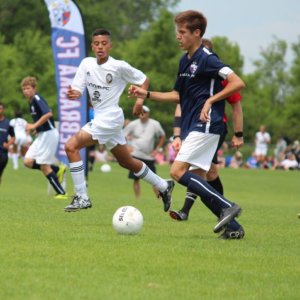 As far as the coaching goes, the dedication and authority of the Red Star staff is what left the greatest impression on him. While his coaches in America always tried to be friends with him first, Nedić says that a more serious approach from the coaching staff is better for him and the fact that the coaches follow his every move and provide him input on where he excels and what his shortcomings are means a lot to him.

He was most attracted to the love people from this part of the world have towards sports, especially football. He has watched videos of Red Star matches since he was a child and believes that support from the stands is one of the greatest motivators for every athlete and that’s what he aspires towards.

His idol is Messi, but as far as the position he plays goes, he looks up to Luka Modrić. Miralem Pjanić also holds a special place in his heart because of his love for the game and for the Bosnia-Herzegovina national team, whose kit Nedić wishes to don one day.

His greatest wish is to one day win a Champions League title and Sportifico wishes him the best of luck on his road towards achieving that goal.