He began his playing career at FC Karađorđe in Topola. He fulfilled his childhood dream at a very young age, putting on a Red Star kit at the age of 12. As a youth and senior player, he played in several Serbian clubs, tried out for a few foreign clubs, but lacked the little bit of luck it takes to see greater success. At the age of 23, he returned to his first club, played his final match and decided to try and achieve his football goals outside the field of play.

Meet Ivan Ilijevski, a coach at the Global Premier Soccer academy in Rhode Island and a member of the Sportifico social network.

Global Premier Soccer is a football academy that works with children in between the ages of three and 19. There are academies in 27 U.S. states with ambitions to spread to other continents as well. As the biggest academy of its kind, it has been a branch of Bayern Munich and is the club’s official partner in North America. The franchise headquarters are located in Massachusetts and Ivan has been a part of the Rhode Island franchise since May 2016. 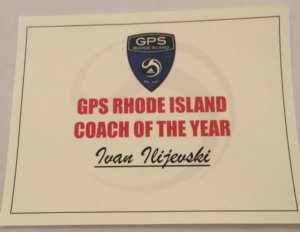 “I work as a full-time coach at the academy and am dedicated to football all day. I am in the office in the morning, taking care of administrative tasks and communicating with parents, while I spend the rest of the day at practices. Since I am coaching four teams, I have at least two-three practices a day and I am also coaching a high school girls’ team that’s competing at the highest level”.

“All of my teams compete in the New England Premier League. We have fall and spring seasons. We also play in five big tournaments every year – Labor Day, Columbus Day, March Madness, Memorial Day and Father’s Day. Thanks to the results I have been able to achieved, I was named the coach of the year for 2017, which is my greatest individual achievement so far in my career.”

A desire to progress was what led him to the GPS academy. He found the job ad himself, passed all the tests, met the criteria and began his story on the other side of the Atlantic. 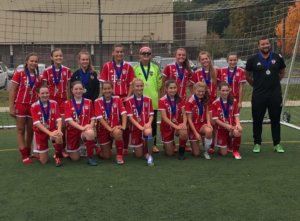 With his team of 13-year-old girls after winning the Columbus Day 2017 tournament in Connecticut | Photo: Private Archive

“The entire process is very detailed and I am glad that I was able to pass all of the steps and earn the job. From this point of view, I’m only sad that I didn’t take this step earlier. The academy is a great place for young coaches who want to learn and develop themselves. The conditions are great, we work with boys and girls from various categories and if you are hardworking and love what you do, advancement is guaranteed.”

When he applied for the job at the GPS academy, Ivan had to put together his resume by himself. By joining the Sportifico network, he was able to record all his results automatically, build his CV and always have access to his results and qualifications.

“Sportifico is a great thing because it enables athletes to connect and follow each other’s careers. Of course, a CV is very important and I didn’t realized that until I got my job at the academy thanks to it. Besides being helpful, the network is also interesting. The more people learn about Sportifico and start using it regularly, the better it will become for all members of the network.”

Besides understanding how important it is for coaches to have CVs, he is also aware of the importance of having a CV as a player. Despite all his efforts, sacrifices and desires, he was not able to achieve his dreams as a player.

“I started playing football in FC Karađorđe, and at the age of 12, I was recruited to play for Red Star. That was when I achieved my childhood dream and wore the red and white kit, despite not playing many minutes and scoring only two goals. When I was young, I also played for Rad, Železničar, Železnik and Žarkovo. I later had tryouts in Portugal, Holland and Austria, but I always lacked the bit of luck I needed to find the right situation. I returned to Karađorđe at the age of 22, played my final match and decided to dedicate myself to becoming a coach.”

When he finished his playing career, the first squad that he worked for was the first one he played for, FC Karađorđe. He was a member of the Duljaj Academy for two years and right before leaving for America, he led the Karađorđe squad, which later went on to win the Dunav Youth League. 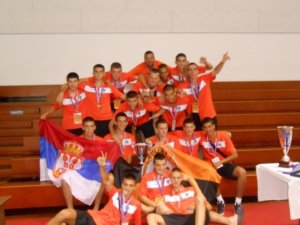 The Duljaj Academy team that finished in third place at the San Marino Cup in 2003 | Photo: Private Archive

“I am extremely proud of all the players and people that I worked with in Topola. Regardless of the significant differences in working conditions, as a coach, I always strived to work on myself and pass my knowledge along to the kids who love football and want to learn. I progressed a lot with the Duljaj family and together we achieved one of the greatest successes of the academy in 2013 when we took home the third place trophy at the San Marino Cup, at tournament in which teams from Italy, America, Canada, Brazil, England, Mexico and Venezuela participated.”

He is especially motivated by working with younger players, because he knows what a big influence a coach can have on children of that age.

“My goal is to make sure that every child that I coach feels important within the team. I strive to make sure that my players are all happy, positive and have a positive effect on one another. Of course, that all goes along with improving technically in terms of playing skills and working to improve every element of their game. I want the kids to enjoy playing football!”

Even though he loves working with children, he still wants to work with a professional team, and has set very lofty goals for himself.

“When I gain more experience, I want to work with a professional team, first as an assistant to an experienced manager and later independently. My dream is to win a Champions League or World Cup trophy! I set lofty goals for myself because that’s the only way I can push myself passed the limits of my capabilities.”

This up-and-coming coach is a great example and serves as motivation for everyone who wants to realize his or her own dreams in the world of football, and the Sportifico team will continue following Ivan’s career and supporting him on his road to success.