Sportifico community member and FK Čukarički youth team striker Luka Marković was in Germany until recently, where he was a guest of Bayern Munich’s reserve team. Thanks to the talent and skill he displayed while he was there, he received an invitation to rejoin the team in a month’s time. 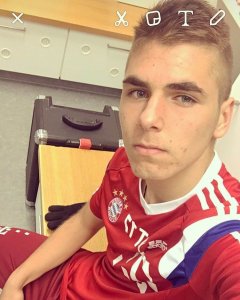 During his stay in Germany, the Serbia U17 national team player had the opportunity to tour Allianz Arena and meet the first-team players of the Bundesliga champions.

Bayern’s reserve team currently competes in the Bavarian Regional League and is fourth on the table. The team also includes 20-year-old Serbia footballer Miloš Pantović. However, Luka didn’t get the chance to train with his compatriot, with Miloš having to play a friendly match for Serbia’s U20 national team ahead of the start of qualifications for the European Youth Championships, to be held in Italy in 2019.

Luka is awaited this weekend by a match in round 22 of the Serbian Cadet League, where Čukarički will go head-to-head with FK Novi Pazar. His team is currently third on the league table, and just prior to Luka’s departure for Germany they overcame their rivals from FK Moravac Orion with a resounding 6:0 victory. This seventeen-year-old striker netted two goals in that match, thanks to which he earned the title of the match’s MVP.