Two years ago, the Serbian national youth squad became world champions with a victory over Brazil in the finals. The manager of this golden generation of players was Veljko Paunović, earning the first trophy of his coaching career.

Having already made a name for himself as a winner in the world of football, Paunović is proving in each new season that this success was not accidental. 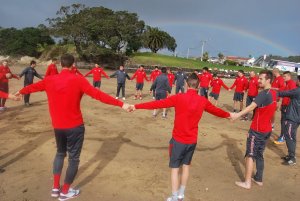 Veljko Paunović and the players of the Serbian national U20 team | Photo: www.fss.rs

As a player, he suited up for Partizan, Marbella, Mallorca, Atletico Madrid, Tenerife, Hannover, Getafe, Rubin Kazan, Almeria and Philadelphia and also played two matches as a part of the Serbian national team. Even before hanging up his cleats, Paunović received his UEFA Pro licence, foreshadowing the fact that he would be following in the footsteps of his father Blagoje, remaining a part of the football world.

After his incredible success with the Serbian youth squad, there was much speculation as to what would be the next step in his managerial career. Paunović chose yet another serious challenge, becoming the manager of the Chicago Fire, a team that finished the prior season at the bottom of the MLS rankings.

After arriving in Chicago, Paunović was able to put together a functioning system which has already shown results this season. His squad already ranks near the top of the Eastern Conference. In a very short period of time, Paunović has established an exceptional reputation in the league, which can be seen in the fact that he was given the honor of leading the MLS All Star team in a match against Real Madrid. 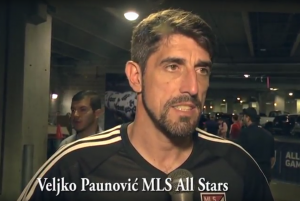 Veljko Paunović before the MLS All Star vs. Real Madrid match| Photo: youtube.com

As a player, he had already experienced the taste of triumph over Real. Not too long ago, in the city derby of La Liga in 2004, Paunović scored a goal against Zidan and Galácticos, earning three points for Atletico. However, he will have to wait to get another chance to repeat this type of success as a manager, since the MLS All Stars were unable to conquer the mighty Real.

The match between the best players of the American league and the winners of the Champions League and La Liga ended in a draw. Paunović’s team, which included legendary international players such as Bastian Schweinsteiger, David Villa, Tim Howard and Kaka, were able to hold their own against Real throughout the entire 90 minutes of the match, but Los Blancos triumphed in penalty kicks by a score of 4:2.

By triumphing in the World Championships, Paunović brought great joy to Serbia and gave football fans in his home country new hope. He is already well on his way to completing the same mission in Chicago. With a streak of wins, he successfully brought fans back into the Fire’s stadium and if he is able to win an MLS title with the team, Paunović will reserve for himself a special place in the club’s history.