Goran Babić, a young footballer originally from Serbia, is the captain of his generation at Southampton!

In conversation with his father, Željko, we found out how much Goran has sacrificed in order to achieve outstanding results, as well as how much the support of his whole family means to him on the road to success. 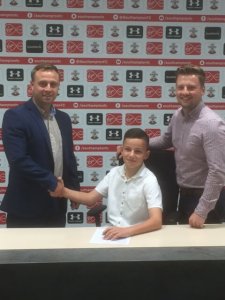 “Although she doesn’t follow football and doesn’t understand it particularly well, Goran’s sister is his fiercest supporter and from time to time she travels to Southampton to watch a match and give him support, while the whole family is maximally devoted to his career. In that way we manage to make his life normal and to ensure he doesn’t get carried away by success, but rather stands firmly with both feet on the ground,” we were told by Željko Babić.

Despite being the captain of the team for the 2003 generation, Goran often also plays for the older generation – he plays in the position of attacking midfielder, which he only started playing six months ago, but in that short period he has already scored 28 goals.

“He previously had a defensive role, but as of late he has been given a chance to play more in attack.”

Like most of his peers, his role model is Leo Messi, while he dreams of playing for Serbia’s national team.

What kind of Pele? We lost!
“In England in the junior categories, up to the age of sixteen, the competitive spirit is not so pronounced, with children raised to see the importance of participation and to believe that every result is good. However, as Goran has a Balkan temperament, this is not the case with him. He played with his team in the final of a tournament organized by Pele. They lost in the final to Manchester United, in the dying stages of the match with a score of 2:1, after missing several chances to win. While all the other children ran to have their picture taken with Pele, Goran left the pitch in tears, his head bowed. He didn’t want to hear about Pele; he just wanted to go home to analyze the match.”

On Tuesdays his parents drive him for training at the Academy, which is an hour-and-a-half drive away from London. He stays there after training with a local family, a so-called “host family”, where he has dinner and spends the night. In the morning he is picked up by a club vehicle and driven back to the Academy for a full-day school program and training; then in the evening he returns to his home in London.

“At the Academy they take care of everything, from media relations to sports psychologists, nutritionists, individual training and schools. Goran loves ice cream more than anything, but he is able to stand in front of a fridge packed with ice cream and not to buy one, because he is aware of how that will impact on his performance on the field, the energy he possess or his dreams,” Goran’s father tells us.

On Thursdays and Fridays he travels to training again, while Sundays are reserved for matches. Saturday, as the day before matches, is always a rest day. In Serbia and the region it is normal for the rest day to be the day after a match, while in England the situation is different.

Prior to deciding on Southampton, Goran had trials with Manchester City, Arsenal and many other clubs, but in the end he opted for the healthiest environment for the development of young players.

“Unlike most of his peers, he sacrifices most pleasures at that age, and along with that he is also extremely committed to school, where he achieves excellent results,” concludes Željko Babić.