A mechanical engineer by training, with the career of a professor behind him – Dušan is anything but an ordinary soccer coach. 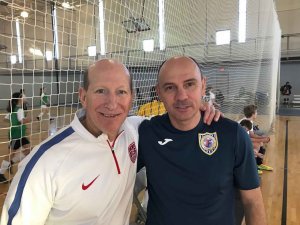 He currently works in Minnesota, leading the squad of the Eden Prairie Soccer Club, but also has his own five-a-side futsal academy. His coaching skills are admired by Keith Tozer, the head coach of the US national futsal team, and the “futsal guru” – as Jakica is known in the States – has only been living across the Atlantic for two years.

He led his team to first place at last year’s Schwan’s Cup, the largest youth tournament in this sport in the U.S., and in all other tournaments – Las Vegas, Chicago and Orlando – they were at least finalists.

Trust where it’s tough to come by

“I recently led twenty boys to a football academy in London, although it’s not the norm in the U.S. for parents to let their children go to another continent, and to do so with a coach who practically only joined the club yesterday.”

Dušan is originally from Novi Sad, where he finished elementary and middle school, before the engineering calling led to him completing a degree at the Novi Sad Faculty of Mechanical Engineering, department of robotics and automation.

Upon completion of his studies, he found work at company “Novkabel” as a metallurgical engineer, only to be promoted to the head of production in his sector after just a year and a half.

“The way you manage a football team and the way you lead a sector within a factory are virtually the same. The most important factor for results is relations with people. The trust I gain from children or co-workers represents the key, and I lead myself according to this principle,” says Dušan, before continuing:

“When I started working as a teacher in a school, my experience of working in manufacturing helped me a lot. When you work in a factory, the most important thing is to adapt to all the qualifications that the members of your team possess, and the same goes for football training or approaching secondary school classes. You have to access different levels of knowledge in different ways in order to bring them to the same, highest possible level.”

Like all children in Novi Sad, he started his soccer career at Vojvodina and FC Novi Sad.
“Novi Sad had a very good youth academy back then. All my friends went to Vojvodina, where I also spent two years, but then I decided to go to Novi Sad, the club from the Detelinara area, given that I come from that Novi Sad neighbourhood.”

Football was an extracurricular activity, with his studies his top priority.

“At one point I spontaneously started paying more attention to school, which was always my primary focus. I didn’t aspire to have a football career, despite the large number of offers that came later. As a child from a working class family, a university degree was my trophy.”

Via the newspaper to the pitch

“Due to my education, I took a break from football during secondary school, but in fourth grade I saw an advert in the newspaper stating that local club FC Grafičar, which then competed in the Novi Sad league, had formed a youth section.” 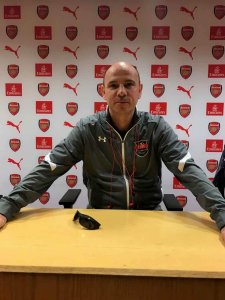 Together with his school friends who’d once trained at Vojvodina or FC Novi Sad, he decided to go for trials, and once again he proved that relations within a team are one of the most important ingredients in the recipe for success. They became so good that soon other teams wanted them to join their ranks – particularly interestingly, they didn’t want them as individuals, but rather “complete”, as a whole team.

“It looked like a group of football drop-outs had got together and started winning everything,” jokes Dušan. “That team then switched together as a group to mini-football, i.e. futsal. Dimić, Goran Ivančić, some of the greatest legends of the futsal national team, were part of that generation.”

Even military service couldn’t keep him away from futsal for long.

“I was serving my military service in Bačka Topola when I was called and told that they’d formed a mini-football club called Đavo, played the qualifiers and entered the first division. I finished my military service on September 2nd, while preparations had started on August 31st. As soon as I arrived, they just informed that practice sessions were at a certain time and that’s when my futsal story began.”

This group of Novi Sad footballing maestros who started playing football together also stopped playing together. Today they are prominent academics, workers in sport and, first and foremost, great friends.

Engineer in the body of physical education teacher

Dušan faced an interesting situation when being interviewed for a teaching job at the Mechanical Engineering Secondary School in Novi Sad. Then Director Jovan Vukčević, who knew Dušan as a footballer, declared happily “a new physical education teacher!”

“But Jovo, I didn’t graduate in sports science; I’m a mechanical engineer.”

From the manufacturing sector he embarked on a teaching career, while his love of futsal compelled him to establish a futsal league for secondary school students, but also a league for teachers in Novi Sad.

As the principal of the secondary school where Dušan worked was a big fan of sports, and also a physical education teacher by vocation, he supported all projects related to football and the school flourished in terms of results.

During his six years engaged as the school’s futsal coach, the Mechanical Engineering Secondary School won over 40 trophies and medals, with both children’s and teachers’ teams.

“I formed a squad of pupils for each grade and a squad of teachers. At first they were only boys, but the girls also became active later. We won everything that could be won, practicing under floodlights that no one had used for 15 years. The children came together around futsal and that was my greatest victory.”

He is also credited with the forming of a cabinet of robotics.

“A major transition for me was when I moved from manufacturing to work at a school and teach about automation and robotics. However, as soon as I saw that children were interested in that segment of mechanical engineering, I did everything in my power and wrote a project for a cabinet of robotics that was supported and approved by the then chief of the ministry, and the rest is history.” 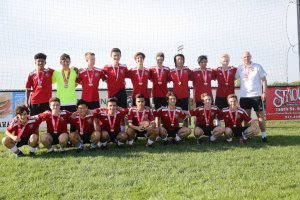 Later he also formed a futsal team and robotics section at the Electrical Engineering School. Dušan practically on his own initiative introduced the subject of mechatronics, which is a combination of robotics and mechanical engineering, and he did all of that as the director of the futsal league for Novi Sad.

Science and football, or futsal, are his two loves that he has never given up on – with the great support of his family that follows him on that road – all the way to his present destination of Minnesota.

For Professor Dušan, or coach Jakica, the world is small, and a ball is equally represented wherever he finds himself.