That same year, he played for the Portuguese national team in the European Championship in France and two years later, achieved his dream of playing in the World Cup in Mexico. Since then, he has played in two European Champions Cup finals with Benfica and has left a mark on Portuguese football that cannot be erased, as a left back who, despite his incredible speed and shot, knew that he belonged on defense. 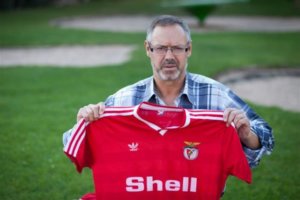 Álvaro Magalhães is a successful football manager today, and arrived to Belgrade as a guest to take in the match between Red Star and Arsenal. During his short stay in the Serbian capital, Sportifico got to exclusively speak with him about his playing and managing career, about how it was working with the legendary Eusébio, and more.

“The atmosphere at ‘Marakana’ is unbelievable, but when we played against Red Star more than three decades ago there were no seats in the stands, so there were twice as many people at the match than there were for the Arsenal match”, Magalhães recalls his memories of the match in which the stadium, currently named “Rajko Mitić”, played a huge role.

Great players have that ability, to not cower before a full stadium and heated atmosphere, but to remain focused on the tasks that were given to them. However, in big matches – especially when playing for a title – fear can creep into your bones.

“In the Champions Cup finals against PSV Eindhoven during the 1987/88 season, I was seventh on the penalty kick list, but Veloso missed his shot in the sixth round and we lost in the finals. I must admit that I was a bit afraid and asked myself how I was going to take that shot, but I didn’t have the chance in the end”, Magalhães recalls the finals in Stuttgart and transitions into the present, looking at it from the perspective of a manager:

“I had a situation when a player asked to take a free kick and because of the confidence that he had, as a manager, I let him take it and the outcome was positive. But the next two times, the same player missed penalty shots and then, as a manager, I had to let him know that the goalkeeper was not going to react on instinct, instead, he was going to try and remember to which corner of the goal that player likes to shoot. It is then up to the player to not allow the goalkeeper to read his shot so easily”.

Magalhães stopped playing football at the age of 32, which is when his coaching career began. The knowledge he gained on the pitch was crucial for him, but the work he put in towards improving himself and his need to get better every day are what has allowed him to evolve along with the game of football.

“Information travels very quickly these days. Today, when young people don’t know the answer to a question, they look it up on the Internet. In my day, I had to speak with in between eight and ten people in order to learn what I wanted to know. However, I make changes according to the times in which I’m living and that’s where my assistants, from whom I learn something new every day, help me most.”

The player should adjust to the coach, not the other way around

“My philosophy is that the player should always adjust to the coach, because the coach is responsible for the results. Sometimes not every player is able to think quickly. There are players that have the ability to improvise on the pitch, but there are others who have limited abilities. That’s why it’s important for everyone to adjust to the coach and to allow him to be the leader, which he is at the end of the day.”

The fact that he has played for the national team on the biggest stage in the World and European Cups and the fact that he played for Benfica, one of the biggest Portuguese clubs, leaves players a little scared and in awe of him, so there’s no need for Magalhães to impose any additional methods of authority.

“These experiences are easy to pass on to players, even the ones who have never had a chance to play in big matches, but you need to be careful towards the players who have yet to win a title in their careers. The desire to win and achieve results is the same whether it’s the World Cup or you’re playing in a lesser league. As a player, the fact that I achieved my dreams never made me stop wanting to win. On the contrary, it gave me greater motivation to continue winning and I believe that I am passing along that type of motivation to my players”.

Magalhães believes that real athletes are the ones who never stop “scratching” after achieving great results, which he has proven himself. However, that winner’s mentality is built off the pitch more so than on it.

“You need to work with players to develop a psychological plan. It’s not always easy for a manager to get his message across and to have everyone receive that message the right way. Sometimes, a strict approach is key, but it’s also important to never cross the line and to never turn to aggressive communication as a manager”. 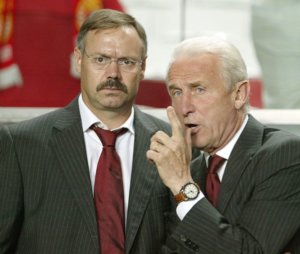 Since the inception of his managerial career in 2003, Magalhães has been working as the manager of Portuguese clubs of varying stature. He made his way back to Benfica and became the assistant of legendary Spaniard José Antonio Camacho and later Italian Giovanni Trapattoni.

In his further development, he was helped out by two completely different managerial styles and approaches, along with the fact that it’s very important for the assistant to be from the same country as the club.

“Camacho demanded constant and dynamic work at a very fast pace, while Trapattoni had a calmer approach and took the training slowly, without rushing and avoiding fatigue, there were also a lot less practices than when Camacho was the manager”. 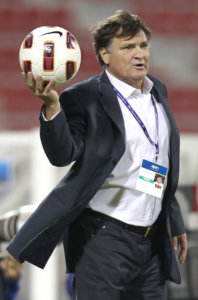 You can tell how fresh a player is by his smile

“The analysis of individual statistics after a match is very important for players, but Camacho had an approach that was a bit different. He would commonly have two training sessions a day several days in a row, during which he would use the second training to see how fresh the players were. If they get on the pitch and they aren’t smiling or their heads are hanging low, he would know that they were tired and then the statistics were no longer important.”

Because of the way in which they functioned as a tandem, there was a saying in Portugal that Trapattoni and Magalhães were a “double,” which when roughly translated would mean two people with one soul. That type of relationship is what gave them positive results and enabled Benfica to win the national championship for the first time in 11 years under them.

The transition from being a manager to an assistant was an effort by the club to help bring the league, culture and system by which the club functioned closer to a foreigner and help him adapt.

“I still believe that at least one assistant should be from the local club if there is a foreigner coming to lead the squad. He then becomes the connection between the club and the coaching staff and develops further professionally”.

Rusciano, one of his key assistants that he takes with him to every club he works for, is an expert for video analysis and the team statistics after each match. However, Magalhães believes that the players are the ones that should be taking care of themselves and what they are doing on the pitch.

“After every match, we meet and analyze our achievements. It is very important for players to understand that following their statistics is not just the obligation of the coaches, but that they have to know themselves how many shots they took, how many good passes they made and everything else that’s important for their positions and their roles on the pitch”, he explained the analysis of matches, adding:

“It’s also important to be transparent with the statistics in order to motivate players. In the locker room, on the board, we put together a list of the top three players from every segment: most successful passes, assists, kilometers run and so forth. Therefore, they are not just fighting to win, they are trying to maintain their positions on the internal board and make it to the top”.

Everyone makes mistakes, except for Eusébio 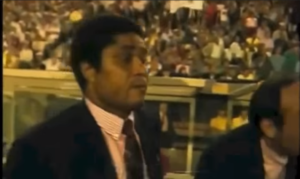 In 1987, Benfica handed over the reigns to then assistant Tino, who had Eusébio in his coaching staff. It was a privilege and an honor for players to have him as a coach.

“I really loved the moments spent with him, especially when he sat down with us players at the same table for lunch or he joined us in the sauna and talked about his experiences and his opinions on where we were making mistakes. Even when we didn’t agree with him, we were afraid to say so, but later he always ended up being right. We joked among ourselves that you can challenge the world, but not Eusébio. That type of footballer, a special person, completely unique”.

Everything he wanted to achieve as a player – he achieved. As a coach, it was important for him to have continuity and to do what he loved. He is currently not working anywhere, and you can get the feeling, just two months into his off time after his contract with Barcelona’s Gil Vicente expired, that there’s something missing.

He knows, and everyone around him knows that this “something” is being a football coach. Álvaro Magalhães lives football and that is something that in sports, and in many other things, separates him from the average person.