Legendary Partizan footballer and current Shakhtar Donetsk coaching assistant, Igor Duljaj, gave an exclusive interview to Sportifico in which he talked about his humble beginnings, his managerial aspirations and about how social media and the Internet have had an effect on modern football.

As a ten-year-old, Duljaj began traveling from his home in the village of Topola to Belgrade in order to train with Partizan. His love towards sport and the club was the greatest motivator for deciding to dedicate himself to football so seriously and completely at such a young age, approaching the game in a way that people tend to think about it only once the hobby starts turning into a potential profession.

“I am thankful to my parents for guiding me towards athletics. Every child is talented in something, it’s the parents’ responsibility to find out what that is,” Duljaj told Sportifico.

The story about how he made it to Partizan is a story that the club still tells all of its young talents. 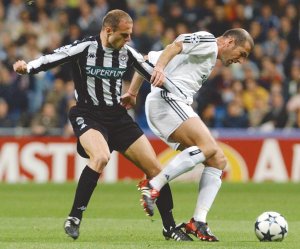 “I remember it like it was yesterday, when Partizan was playing Topola with a generation of players who were two years older than I was – Saša Ilić, Veljko Paunović and others were on that squad. Their coaches liked me right away, but there was no way for me to make the move to Belgrade at the time since I was still very young and my family was tied to Topola because of work obligations. In the end, my father played a very important role, he said that he would handle everything and that he would make sure that I made it to Belgrade for practice and that I was most definitely going to play for Partizan”, he said.

Duljaj always dreamed of playing for Partizan, not Barcelona or Real. His later successes on the international scene were the result of hard work, but all of his dreams were always tied to Humska Street, where Partizan’s stadium stands.

Sports CV – players have an advantage

When he began his career, social media and the Internet were not as prevalent. Today, it’s a lot easier for players create a presentation for themselves by creating a sports CV and using video clips to show what they can do on the pitch.

“Information is a lot easier and faster to come by. Back in the day, we used to send videotapes, now it’s much easier and a player has the ability to get ahead if he is serious about managing his own career. Clubs will bring in new talent by first taking a look at the stats that they send, then scouting them and finally calling them in for an audition match”, Duljaj said.

Even though he was a defensive player, he was very active in the middle of the field as well – which could be seen with the naked eye and confirmed with an adequate analysis of the statistics.

“I believe that statistics aren’t everything, but they can offer valuable information! They are not just numbers, they provide you information about how many successful passes you made, how far you’ve run…detailed statistics are needed by the manager not the player, the player needs to be able to ‘read’ the stats in order to understand where they need to improve on their own without waiting for someone to suggest improvements to them,” he said.

During his storied career, Duljaj won many trophies, including the then UEFA Cup, and he admits that these championship matches awakened a special type of emotion in him.

“I had the privilege of playing for leading clubs and knowing the feeling of playing for a championship. It’s a great joy when a footballer knows that he needs to win in order to be the best compared to the feeling of winning when trying to survive. Motivation plays a key role and accolades only provide more fuel to the fire”, he said. 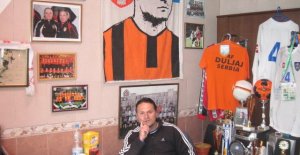 Duljaj opened a football academy in Topola that bears his name, which is being led by his brothers Joakim and Nenad. He is aware that the Academy would be more popular and would have more players if it was located in Belgrade, but Topola is his home.

“Football enabled me to achieve many things in my life, it’s the least I could have done to repay that debt. Wherever I go, I proudly proclaim that I am from Topola. You won’t hear anyone in Ukraine or Russia say that Igor Duljaj is from Belgrade, everyone knows that Belgrade is important because of Partizan, but I am from Topola”, Duljaj reiterated.

And after football? More football!

Current FC Akhmat Grozny manager Oleg Kononov is most responsible for the fact that I decided to become a coach. When he was my manager in Sevastopol, he asked if I wanted to be his right-hand man, to be a player and assistant at the same time. The club liked the idea and they sent me to Kiev for training. If wasn’t for the war in Ukraine, I would be the manager of Sevastopol right now, but I then received a call from Shakhtar and accepted the job, where I’m currently an assistant for the A team.

Many believe that footballers who had a successful playing career have an advantage when it comes to transitioning into managerial positions – because they are able to strongly identify with their players, among other things.

“They told me to forget about what it’s like to be a player the day I decided to become a coach. However, that’s not possible because as a former player, I feel everything and I can notice every change in a player’s demeanor”, Duljaj said.

“When I started to work as an assistant, I understood how much I truly don’t know about football yet, but I’m listening, learning, absorbing and want to be as successful doing this as I was as a player”, he added.

A strong work ethic was synonymous with Duljaj during his playing career and the same can be said in his new profession. At just 37 years old, great things are ahead for him.