Following a season to forget in which they couldn’t achieve European qualification, Chelsea went back to championship ways, and one of the players deserving the most credit was Serbian international Nemanja Matić.

In an exclusive interview for Sportifico ProFeed, a 28 year old midfielder speaks on his beginnings, on what playing for the national team means to him, but also about what is the biggest obstacle for development of Serbian football.

His family is from Ub area, where he made his first footballing steps. Nemanja paved his way to the top via Slovakia to become one of the best midfielders in the world. 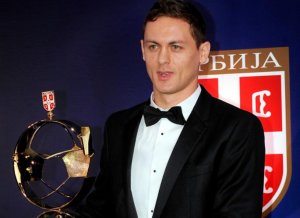 Nemanja Matić with Serbian Player of the Year award for 2014 | Photo credit: www.fss.rs

Aside from being highly rated on-pitch, quiet family life and displays of modesty have allowed for Nemanja to become respected off the pitch too, while also making him a role model and positive example for young sportsmen and sportswomen aiming career heights such as his.

For starters, we asked Matić which are the principles he’s held on to throughout his career.

“I always believed I could reach my goals if I give 100 percent of my abilities. Belief in myself helped me get to where I am now. I knew there would be someone to reward me for my efforts”, Nemanja opens up for Sportifico.

During our recent trip to London, Sportifico delegation has had a chance to witness how much Nemanja cares about sharing his experience with young players.

“My first advice for them is to never give up on their dreams and to always give maximum effort to make those dreams come to life.”

Many Serbian footballers choose to get to the international football scene via Red Star or Partizan, but Nemanja decided to take the alternative road and at the age of 18 he found himself in Slovakia, playing for Košice.

“I wasn’t looking for the club that will offer me a lot of money, buy me a new car or something similar, I was looking for the club that will allow me to show my qualities and where everything will depend on my performance. I had everything that a young player needs – a good pitch and a gym, a great coach and teammates. Slovakian league is quite adequate and allows young players to progress.”

I had a phenomenal relationship with José, but with Conte as well. Their training methods differ, but their goal is the same – to become number one.

When asked how important is the movement off the ball for a footballer playing in his position, Nemanja replies:

“It’s important if a player knows where to move and adapt to any given situation. In that sense, my height (194 cm) could be an advantage, but also a shortcoming at times.”

Since they aren’t playing in Europe this season, Chelsea could focus on winning the domestic championship, which is exactly what happened – their 6th Premier League title, fifth since Roman Abramovič takeover, arrived to Stamford Bridge. Last season, playing on multiple fronts wasn’t an easy task for the Blues. 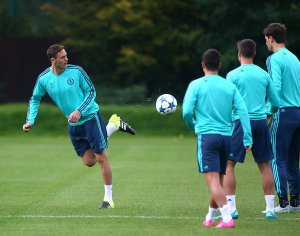 “Preparing for games has been somewhat easier this season, since we didn’t have as many matches as the season before, the team was well rested. However, I don’t think there will be a repeat of last season because we’re one year more experienced and know what we’ve been through.”

English Premier League is among the wealthiest in the world, while Chelsea in the 21st century grew to one of the most prestigious clubs with working conditions that are “out of this world.”

“Chelsea’s training centre is wonderful, there are around 30 pitches there and it contains absolutely everything a professional footballer desires – from swimming pools for recovery to spa centre and cutting edge gym.”

More often than not, players of the Serbian national team are at the receiving end of criticism from the domestic media outlets, but Matić’s position is clear concerning the national team and everything else related to playing for the Eagles carries.

“Playing for Serbia puts you under pressure, but I prefer to call that responsibility. Once you’ve put the shirt with our crest on, you become aware that you’re expected to do your utmost best and you make sure everyone supporting Serbia has a nice day. I’ve never been exposed to public scrutiny the way players usually are, and I hope it will stay that way.”

“Filip, my son, fell in love with football, but he’s still too young for me to evaluate whether he should follow my steps, if you can evaluate such thing at all. For now, he’s enjoying his football and as long as he’s feeling that way he’s got his personal driver to take him to practice. If he decides to do something else in his life, he will have the biggest support from my wife Aleksandra and myself.”

Nemanja comes from Ub and he does many great things for the local club, paying back to his community which he finds that fulfilling.

“Vrelo Sport is the club where all of my childhood friends play, and my entire family supports them, and so does the entire village of Vrelo,” says Nemanja while touching upon painful subject – football development in rural Serbia:

Towards the end of our conversation we asked Nemanja where he sees himself once he hangs up his boots and retires from professional football, and his answer is in line with the attitude he’s shown throughout his career – present moment is all that matters.

“I still haven’t made up my mind what I’m going to do once my career is finished. Until then, I want to enjoy the game just like I did since day one,” concludes Matić for Sportifico Profeed.

Determination, hard work and self-belief are always the right recipe for success in sports. However, it is equally important to stand with both feet on the ground when the biggest of success comes – and Nemanja passed this test with exceptional marks which is why he is where he is today.